The environmental impact from Swedish mines has decreased sharply in recent decades. That a mine still has some measure of impact on its environment is inevitable.

The most tangible impact comes in the form of noise and dust, intrusion on the landscape, and the emission of pollutants into the air and surrounding watercourses, lakes and groundwater. The mining industry is also a major consumer of energy. However, the most significant environmental aspect of mines is linked to the management of mining waste, which can create long-term problems.

Mining waste refers both to gangue (waste rock) and to tailings arising in different parts of the production line. 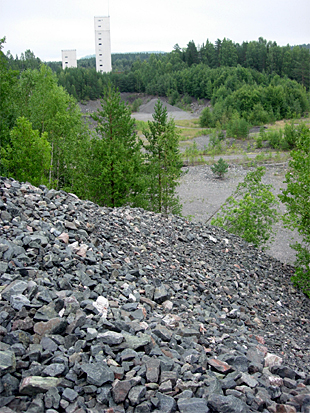 Waste arising from mining is called gangue. Both surface and underground mining often require large quantities of rock to be broken away to reach the ore. Gangue is usually placed in heaps near the mine. Many Swedish mines use parts of the gangue as a resource, e.g. as aggregate for road construction or to refill mined rock chambers and open pits.

Tailings are a fine-grained residue, mainly consisting of gangue minerals that remain after the separation of valuable minerals and metals from their ore in a processing facility. Tailings are deposited in the vicinity of the mine and are therefore pumped together with process water to large ponds, known as tailings impoundments, where the tailings settle. Excess water from these impoundments is routed to a clarification impoundment and from there the water is often recirculated to the process in the processing facility.

Mining waste has different characteristics depending on the type of ore being mined. Our Swedish ores can be roughly divided into oxidic and sulphidic ores. The oxidic ores predominate in Norrbotten's iron ore field, while the sulphidic ores are more prominent in, e.g. the Skellefteå field in Västerbotten. However, Sweden's largest sulphide ore mine, Aitik, is in Norrbotten.

It is primarily from waste in the mining of sulphide ores that serious environmental problems can arise due to their content of iron sulphides such as pyrite and pyrrhotite. When mining waste containing iron sulphides is allowed to lie unsheltered and comes under the effects of weather and wind, it will crumble through an oxidation process. This weathering results in the release of an acidic and often metal-rich leachate into the surrounding environment, known as Acid Mine Drainage (AMD). If the waste also contains buffering carbonate minerals, the problems are smaller. However, in our Swedish granitic bedrock, it is common for buffering minerals to be insufficient to neutralise the acidifying oxidation process that arises in sulphidic waste that is not properly managed.

The chemical processes that occur in the weathering of iron sulphides are principally dependent on the availability of oxygen, and the absence of oxygen will limit oxidation. The most common methods for preventing the emergence of acidic and metal-rich leachate is therefore to cover the mining waste with earth or water.

Today, leaving waste without any covering at all is unacceptable, and many mines often make active use of successive after-closure, even during the mine's lifetime, to prevent an uncontrolled oxidation process.

The greatest environmental problems associated with mining in Sweden are often the result of historic waste heaps that were left uncovered.