In areas where sulphide sediments occur, acid sulphate soils are often formed, which often leads to periods with a very adverse effect on the water chemistry of watercourses. High metal concentrations and low pH may in certain situations lead to fish death.

Sulphide sediments are fine-grained deposits formed on the Baltic sea bed after the last ice age. The soils are often black in colour due to sulphide minerals. In many areas, land uplift has caused these former sea beds to become land.

Stable below the water table

As long as the sulphide sediments are below the groundwater table, they are stable and have no impact on the surrounding environment. If, however, sulphide soils are exposed to oxygen in the air, the sulphide minerals oxidise. The soil's pH value then decreases sharply and some of its metals become readily mobile. The soil thus formed is called acid sulphate soil. This soil is among the most environmentally harmful soils in the world. 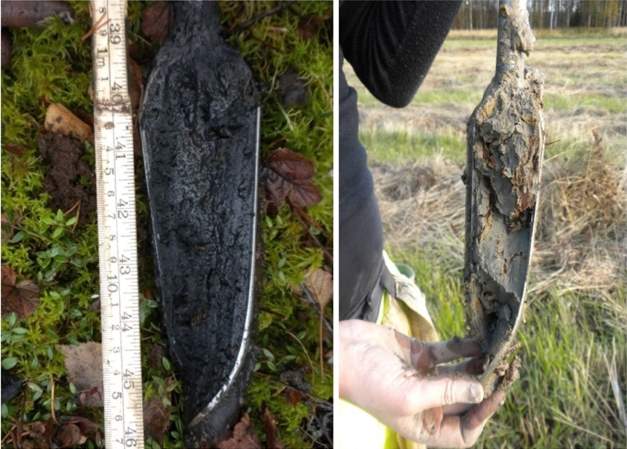 Sulphide sediments (left) are often completely black or have black bands and are characterised by a neutral pH. In contact with air, the colour of the soils lightens quickly and their pH decreases. Acid sulphate soils (right) are formed after oxidation of sulphide soil and can often be recognised by the naked eye. They are characterised by vertical cracks covered by a layer of rust. Photo: Gustav  Sohlenius.

Finland also has large areas of acid sulphate soils where metal and acid leakage has periodically caused major problems with fish death in coastal waters. In these areas, it has been possible to demonstrate that the release of certain metals from acid sulphate soils is greater than that of Finnish industry as a whole. Although the area with acid sulphate soils is less in Sweden than in Finland, it is clear that these soils in some areas have an adverse effect on the environment and that they contribute to a major release of metals.

Sulphide sediments are most commonly occurring along the coast of Norrland

The work has been reported in the publication below.