This lecture covers the different types of mining waste, how they are formed and how they are disposed of or used.

Mining produces large amounts of waste. In Sweden, the mining industry accounts for over 80 percent of the country’s total waste production each year. While the amount of waste can be substantial, not all waste is considered harmful to the environment. Some waste might even be safe to use in other applications, such as in building materials. However, when the rocks contain certain minerals in enough quantity combined with poor management of the waste, it can become a large risk to the environment and health of local communities.

Waste occurs in several stages of the mining process and throughout the life of the mine, from the first exploration drilling project to the last processed material before mine closure. Several types of waste are generated in a mine, but three types stand out with the largest volume: waste rock, tailings and mine water. In some cases, the mine uses certain chemicals such as cyanide in the processing stage. These chemicals often account for a small volume of the total waste, but can pose a large risk due to their high toxicity. Below follows a summary of the most important types of waste from mines.

Waste rock is often stored close to the mine to minimize transports. The waste rock is deposited in piles or heaps.

The composition of the waste rock controls what elements can be released to the environment. Some elements are highly toxic even in small concentrations, for example mercury or some compounds of nitrogen such as ammonia, while other elements are less toxic but pose a threat in higher concentrations, for example zinc and copper. There are often different types of waste rock within a mine, some might be more harmful than others. One effective way of working with waste rock management is separation of different types of waste rock.

When water and air starts to break down the waste rock, called weathering, the elements can be released to the environment. A large block of rock weathers slowly as it has a low surface area while smaller pieces create higher surface areas, making them more susceptible to weathering.

Sulphide minerals are easily weathered in contact with oxygen. When sulphide minerals break down, they can produce acid water. The acid water further speeds up the weathering of the minerals, called chemical weathering. The result is an acid water with high metal content, called acid rock drainage (ARD) or acid mine drainage (AMD) when in association with mines. This topic will be further discussed in lecture 5. 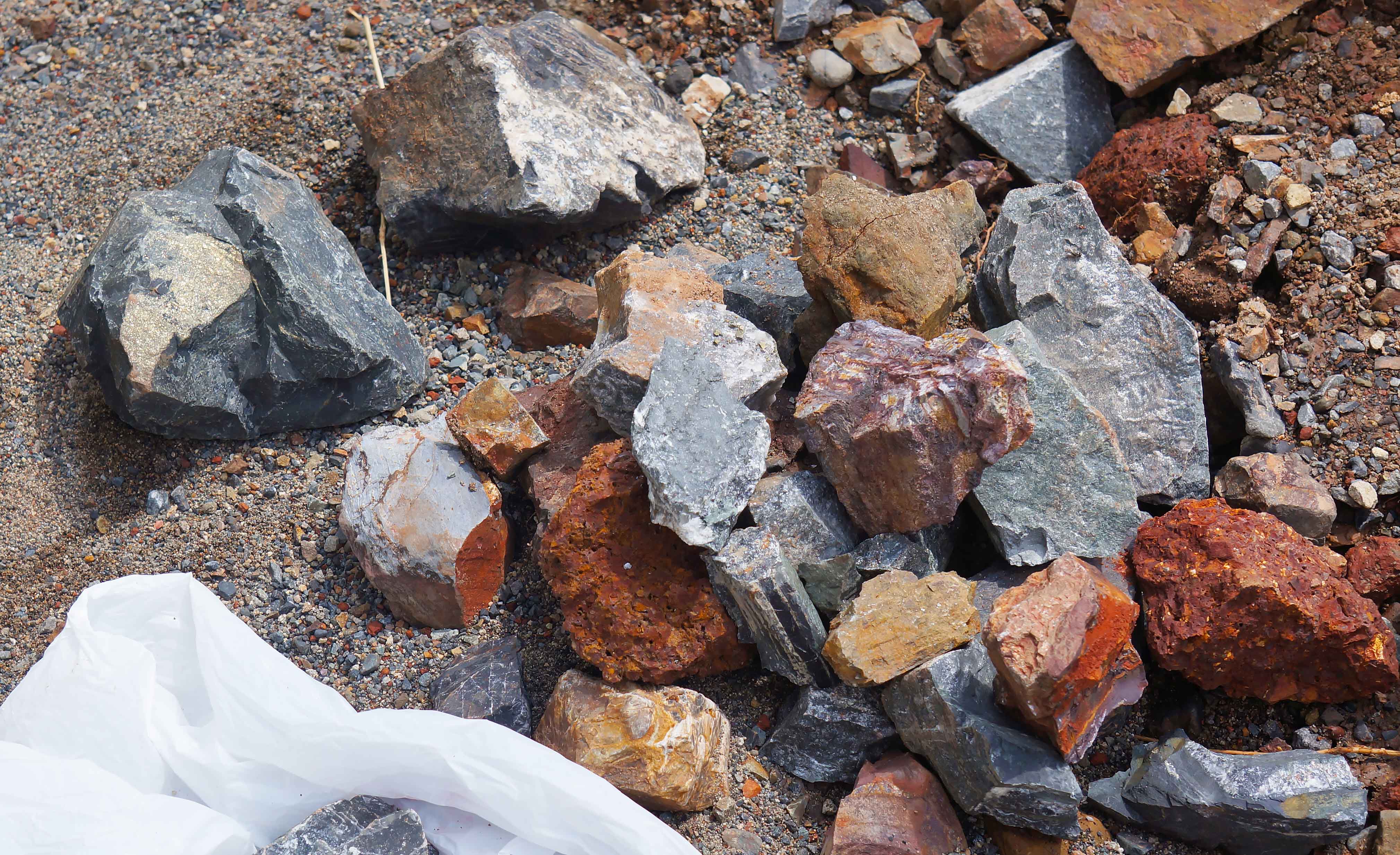 A collection of rocks taken from a waste rock pile. There are several types of rocks, and the weathering differs between them. The red rocks are the most weathered rocks in the collection.

As the ore gets processed and the valuable minerals gets separated, a fine-grained mineral sand remains as waste, called tailings. The amount of tailings that remain is controlled by what grade the ore is, meaning the percentage of valuable minerals in the ore. For example, if the grade of an ore is 1 percent copper, 99 percent of the total ore would be deposited as tailings. Iron ores generally have higher grades than sulphide or gold ores, often going over 50 per cent or more. Less tailings are therefore generally produced in iron ore projects.

After separating the valuable minerals, the tailings are often pumped in a slurry through pipes to be deposited in a tailings storage facility (TSF) (also called tailings management facility, TMF). The pipes are equipped with spigots in several different places around the TSF to evenly distribute the tailings. The TSF is built especially for storage of the tailings and is designed for the location and the geology. There are different types of TSFs and ways to build. The most common type of TSFs are placed on the surface and built with high embankments that are engineered to retain the tailings and water. This type is called conventional impoundment storage.

The embankments of the TSF are often built with waste rock from the mine. The waste rock needs to be non-acid generating rock (NAG) to ensure long-term stability. Sometimes the embankments include a layer of geomembrane, a type of synthetic liner or barrier with low permeability, which is mainly used to stop the fine-grained tailings from seeping in to the coarse waste rock.

When tailings are  held under water it is called a subaqueous deposition. The technique helps to minimize the oxidation of mainly sulphide minerals, but also influences the way the tailings settle in the TSF which in turn impacts the long-term stability. Subaerial deposition, deposition above water, is more common than subaqueous. 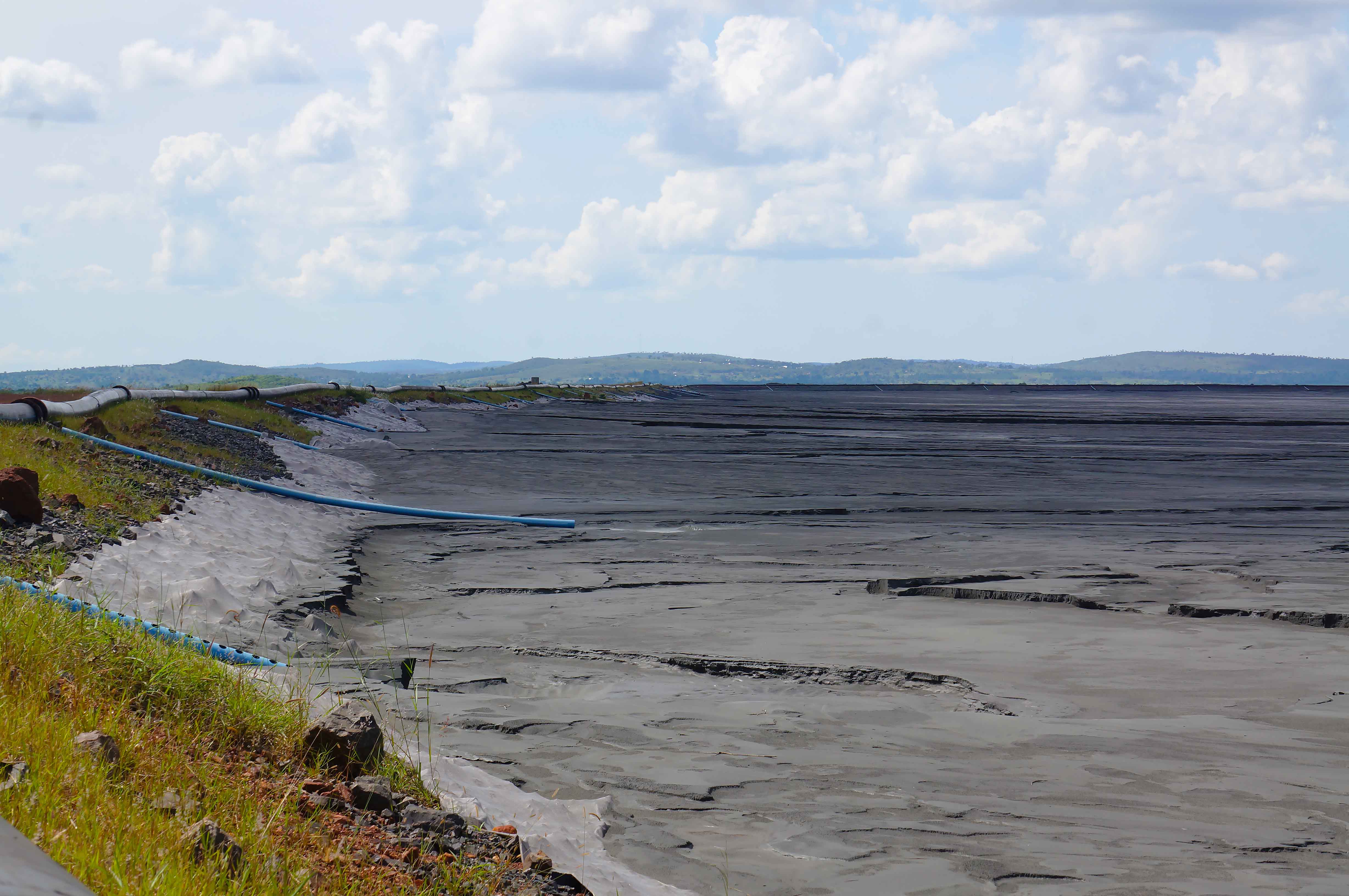 A tailings storage facility at a gold mine. Spigots are seen going out from a pipe which is transporting the tailings.

Water is used in many of the processes within the mine and the processing plant. Some processes, such as milling, can use large volumes of water and potentially contaminate it with metals and other harmful elements. Water is valuable, and often recycled and used over and over in different processes. Eventually the water is collected and released to the environment. Sometimes the water must be treated in different ways before it can be released. Water treatment can be categorized in active or passive treatment.

Active water treatment means that the water is treated within a water treatment facility. The methods for active treatment are several, but often include raising the pH of the water with the addition of for example limestone or caustic soda, which in turn cause metals to precipitate and settle. This can be done in certain settling or sedimentation ponds. In some cases, flocculants are added to make the process quicker. The treatment can also be complemented with other methods, such as filter systems.

Passive water treatment is cheaper than active treatment, which generally is a large cost within the mine operations. However, there are still difficulties in treating highly acidic waters with passive techniques. The combination of active and passive treatment techniques can be used to lower costs.

The chemicals used in processing are in a much lower volume than the other types of wastes, but can be of a high risk due to high toxicity, even in small concentrations. A common chemical used in gold extraction is cyanide. The cyanide dissolves the gold to an aqueous solution, making it a simple and cost-effective technique.

Cyanide is highly toxic for people and the environment. Even low doses of cyanide can cause permanent damage in humans or animals. However, aqueous cyanide is easily hydrolysed, especially when in contact with UV-rays from the sun. When the cyanide is hydrolysed it breaks down to other chemical compounds that are less toxic. The cyanide solution is kept in a closed system during the extraction phase and is then hydrolysed, sometimes in a so called cyanide destruction plant.