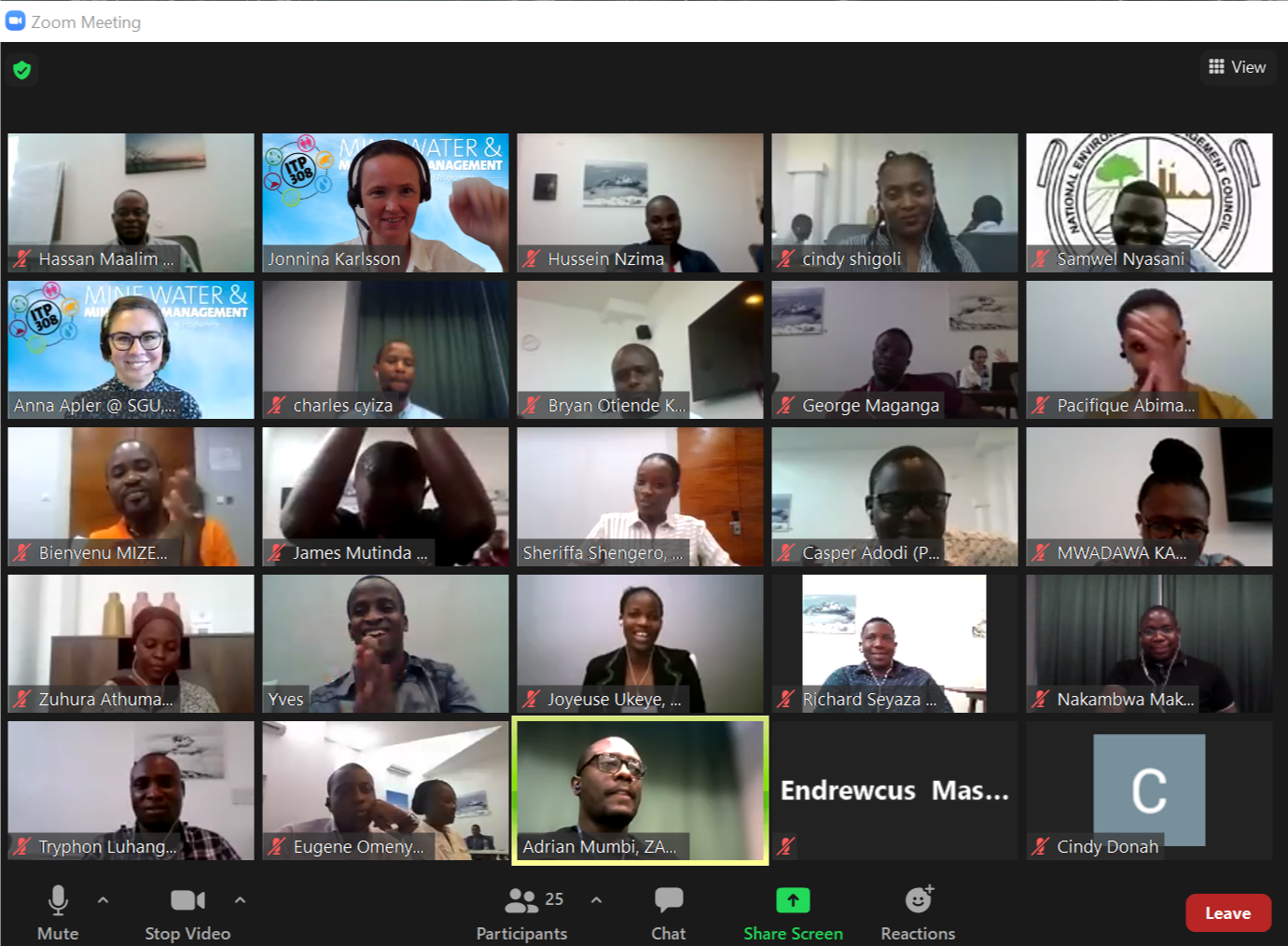 ITP 308 - MINE WATER AND MINE WASTE MANAGEMENT: FULL STEAM AHEAD IN A NEW SUIT

The ITP308 has stepped up its Mine water and mine waste management training to become more sustainable and current. With a new online programme, the programme organisers and its participants are currently up and running with the same commitment to making positive changes in the mining industry as before the pandemic

Apart from some re-arrangements in the organising staff, this includes a new and improved selection process with Zoom-based interviews and small test assignments for the digital platform we use in training (Moodle). It also includes fewer and shorter travels, online training conferences located in participating countries and a few days of field work in Africa as part of the final regional conference. To improve the communication between the organisations and the organisers, so called ‘focal points/individuals’ have been established. One in each organisation. The organisers are very grateful to the managers and many alumni participants who have accepted the task of being the coordinators of their organisation.

The first group to experience the online training was group number four, which is going to re-convene in Malå, Sweden in August 2022, for Change Project presentations and field work. There were some logistical challenges during the first online training, but the participants carrying out the training were enthusiastic and hardworking and managed to pull through, with many of their change project ideas focusing on training of different kinds.

Rwanda partook for the first time in group number five, and everyone was interested to learn more about their mine water and mine waste challenges. For the start of group five, a new acceptance procedure was put in place and training in two groups from hotels in Africa was arranged. The groups connected online with each other and with Sweden, from conference facilities. The group recently concluded their initial online training in Rwanda and Tanzania (May 2022) and their change projects include topics such as ASM process improvements and Cyanide container challenges.

The selection process for group number six was concluded at the end of June and training will take place in Zambia and Tanzania in September. We are excited to meet up with our new programme participants in the very near future, and by the number of qualified nominations and applications this looks to be an exciting training.

Group number seven will be able to apply towards the end of the year when the application brochure will come out. Interview process will be conducted in January/February 2023 and training is planned for May 2023. Keep an eye out for the application request in October 2022!

ITP 308 at the Mining Indaba

The ITP 308 has a goal to showcase the work carried out by its participating organisations and countries for the greater good within the mining industry and for all its stakeholders. By showcasing selected change projects, the participating organisations can show the mining industry what the latest, or future, additions are to legislations and ongoing work in various countries.

A change project from Kenya, was selected as the first project to participate in the conference. The participating organisation was NEMA (the National Environment Management Authority) and it was represented by Reagan Awino from group number one of the ITP 308 and Sellellah Okoth, of the Environmental Governance Programme (EGP), as well as the ITP trainer Anna Apler from the Geological Survey of Sweden.

The showcased change project was originally called ‘Environmental framework for mine site closure’ and has after its completion in the ITP programme been incorporated in another large project, the EGP. The collaboration between the ITP and the EGP has brought with it a document called ‘Mine site closure, decommissioning and rehabilitation guideline’ that will be beneficial to the authorities and the country at large in the management of closure of mines upon its completion. Thus, at this year's Mining Indaba, the mining industry could get a heads up on what the future of Mine closure procedures will look like in Kenya thanks to our colleagues at NEMA.