Acid rock drainage from sulphide minerals is the most significant environmental impact from mines. In this lecture we discuss weathering, acid rock drainage and methods for prevention and mitigation.

The most significant environmental impact from mines results from minerals that weather and release potentially harmful elements into water resources. Sulphide minerals are easily weathered due to their chemical properties and they also often carry metals that can be harmful to the environment, such as zinc, lead, cadmium etc.

Sulphide minerals are simply compounds of sulphur and one or several metals. Many ore minerals are sulphides, such as chalcopyrite, sphalerite, galena, cinnabar, stibnite etc. Sulphides are formed in reducing environments with little or no amount of oxygen, and therefore they can become unstable and oxidize when they come in contact with atmospheric oxygen. When sulphide minerals oxidize metal ions will be released into solution. Additionally, some sulphide minerals will release hydrogen ions (H+) during the process which lowers the pH of the water. Acid and metal rich water originating from oxidation of sulphide minerals is called acid rock drainage (ARD).

ARD is a naturally occurring process that happens in many rocks containing sulphides that are exposed to oxygen. The process is often slow in nature, impacting low surface areas and low concentrations of acid-producing sulphide minerals. However, at mines the surface area of the rock is greatly increased as the grain sizes are lower in both tailings and waste rock. Mining can even be done in an area with large abundance of sulphide minerals, an abnormality with several hundreds of times higher concentrations than in average rock. When ARD is happening in a large scale with high concentrations within a mine, it can be called acid mine drainage (AMD). The process of ARD and AMD is however the same. 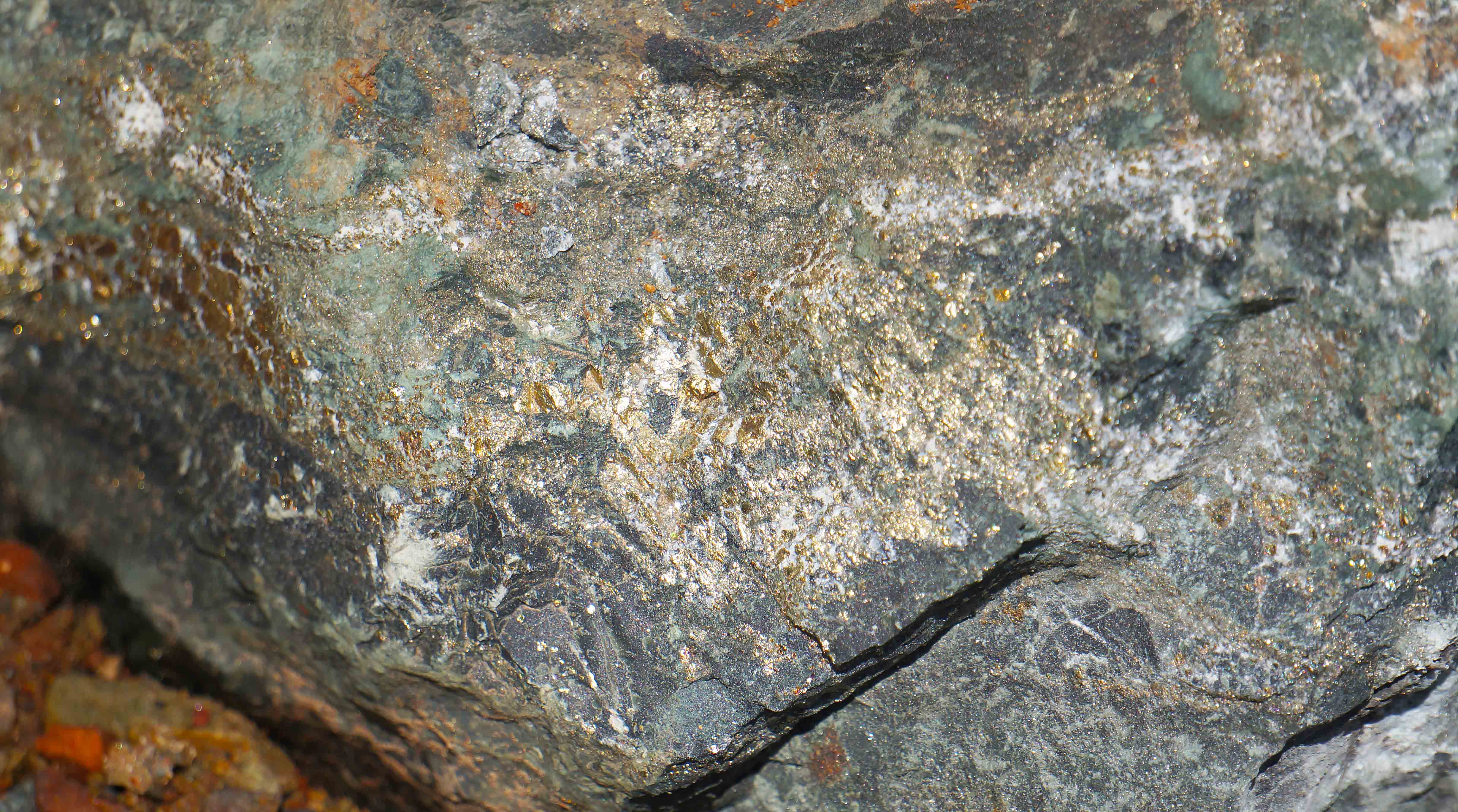 Sulphide minerals in waste rock from a gold mine.

Significant AMD can sometimes be spotted in open pits or at waste rock piles, showing a coloured drainage of water, for example at open pit walls or bottom lakes. The colour comes from the metal ions. An abundance of iron ions will give the water a red colour, which is most common. The water can also show other colours, for example green for copper. But many AMD cases can be hard to spot with the naked eye, requiring monitoring of recipients (surface water and groundwater) for pH and metal content.

Even if ARD has been in progress since the start of a mining project, it can in some cases take years to detect. The ARD-process can start slowly, but as the pH lowers and feedback mechanisms start it can rapidly increase and quickly get out of hand. AMD at a mine site can become both difficult and expensive to mitigate or stop. 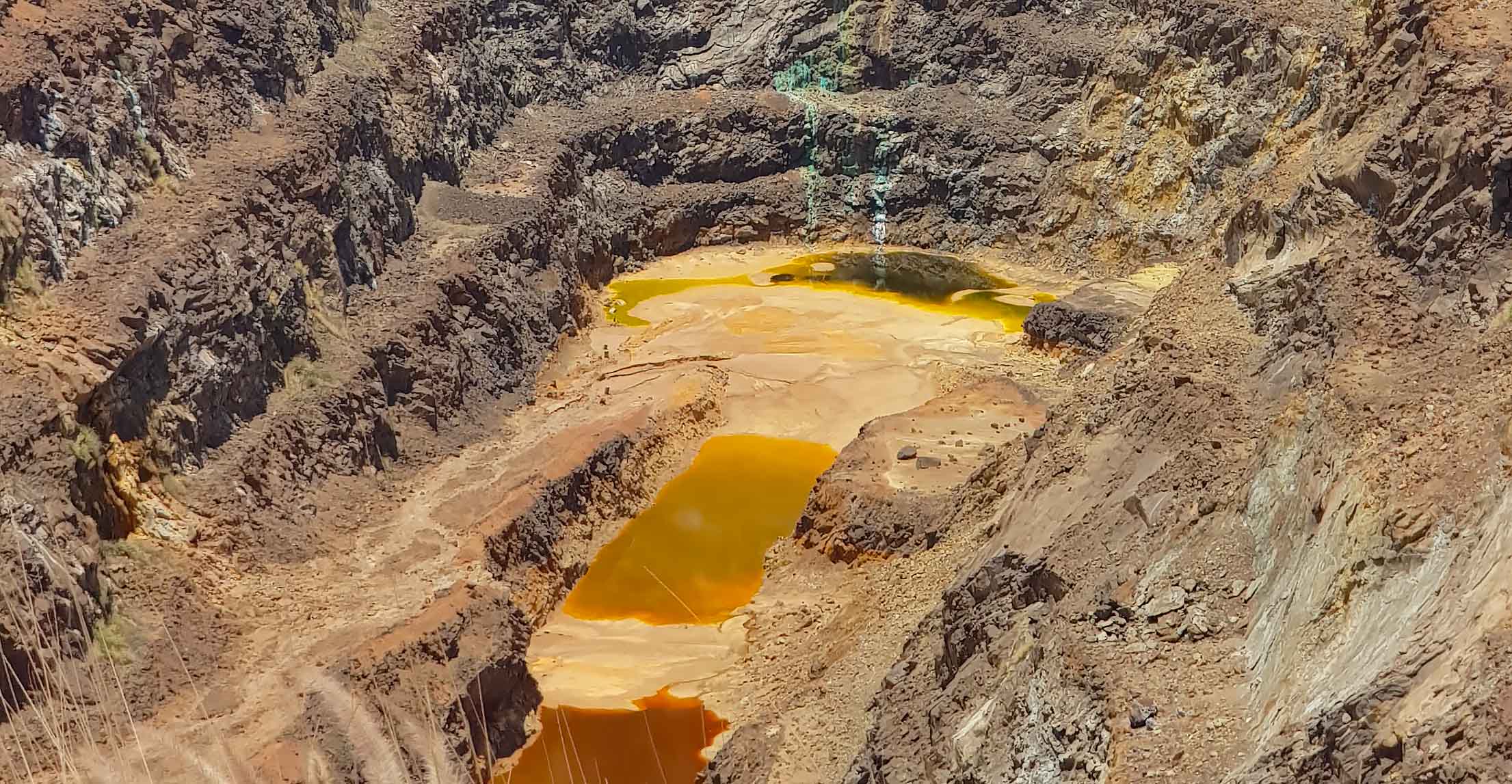 Acid mine drainage at an open pit. Acidic, metal-rich water can be seen at both the bottom lake of the pit and the pit walls.

An important part of the Environmental Impact Assessment (EIA) is to predict ARD. This can be done by several different methods, but generally begins with characterization and sampling of the ore, tailings and waste rock. The samples are then tested in a lab in different ways to see if they will produce acid. In the case of waste rock, a separation is often made between potentially acid generating rock (PAG, or acid forming rock, PAF) and non-acid generating rock (NAG, or non-acid forming rock, NAF). Some rocks may be composed of an abundance of acid-producing sulphides, but also have buffering minerals, such as calcite. Calcite increases the pH, and may neutralize the acid if in enough concentration. As the pH increases, the metal ions settle easier. By predicting the ARD, the right measures for prevention of ARD can be made.

As a mining project begins, it is important to have a proactive strategy for preventing ARD. This strategy will differ between mining projects, but generally begins with separating PAG from NAG, limiting the availability of oxygen and controlling the pH. An example is to separate heaps of acid producing waste rock and covering the material with soil to limit the availability of oxygen. The PAG can also be mixed with a buffering agent, such as limestone.

Methods for mitigation of ARD are used if the mine is already producing acid waters. Many of the mitigation techniques are based around passive or active water treatment, generally to increase the pH and reduce the volume of water and amount of metals in the water leaving the mine. It is generally difficult and expensive to stop existing AMD.