LECTURE 3: MINING AND THE ENVIRONMENT

This lecture gives an introduction to different kinds of environmental impacts associated with mining and explains the implications on local communities and nature.

Mining has several impacts on the environment. Some can be prevented or mitigated, such as effects on water quality. There are also permanent effects, such as changes in the landscape. Which environmental effects that are deemed acceptable are generally decided in a legislative process, either in court or by a governmental agency or institution. The legislative process differs between countries. To receive a permit for mining, the company (or governmental agency in some countries) is generally required to carry out an Environmental Impact Assessment (EIA). The EIA process serves to help decision makers to understand the environment and to assess the different effects the mine will have.

The EIA process results in a document that explains the different environmental impacts the mine will have. The EIA can take years to produce and include input from several experts in different fields. To begin assessing the environmental effects, a baseline study is often done. The baseline study aims to explain the environment prior to the mine. This can include measuring local environmental parameters, for example in rivers where flow of water, acidity and metal content can be studied. It can also study the flora and fauna in the area, for example by counting endangered species and studying the quality of the ecosystem. Other parameters are soil quality, air quality and so on.

To explain the possible environmental impacts of the project, an impact analysis is done. This analysis begins by characterizing the ore and waste that is to be mined. The characterization gives information on the composition, amount and properties of the ore and the waste to further understand how it will react and what potentially can be released into the environment. It continues to explain the different methods and processes that are to be used in the mine, and how they might impact the environment. An impact analysis should include all risks to the environment, big or small, likely or unlikely.

The impact analysis should also mention the assumed risk to the environment. Risk is often divided between the likelihood of the event, and the severity. For example, a low severity could mean that the risk is low, but if the likelihood of that event is high or even certain, the risk should be taken into higher account. A case can be made from decreased water quality from mining. This event is often certain to happen at mining projects, but the severity may be low. However, due to the long exposure with the high likelihood, it should be deemed a higher risk to the environment. At the same time, an unlikely event with catastrophic severity should also be deemed a high risk. For example, failure of a tailings dam is a very unlikely event, but if it would happen we would have catastrophic consequences, thus making it a high-risk event.

An important part of the EIA process is public participation. It is often encouraged, and sometimes required, that the EIA process also studies social impacts, such as changes in employment of local communities, health status, changes in infrastructure and so on, to see how the mine will change the lives of the local communities. This often involves getting the public engaged, and in the meantime allowing them to give opinions and propose changes. By providing public meetings or hearings, along with sharing EIA-reports with the public, it keeps the public informed.

A significant impact from many mining activities is the impact on water quality and the availability of water. As a mine can take up a large area, it can change the way water travels within the landscape. Sometimes, rivers need to be re-routed to not flood the mine. At the same time, groundwater needs to be pumped to also not flood the mine. By disrupting the landscape and possibly building dams or re-routing rivers and groundwater, the availability of water can be impacted over long distances downstream from the mine. This can impact flora, fauna, local communities and other industries and should be addressed in the EIA. 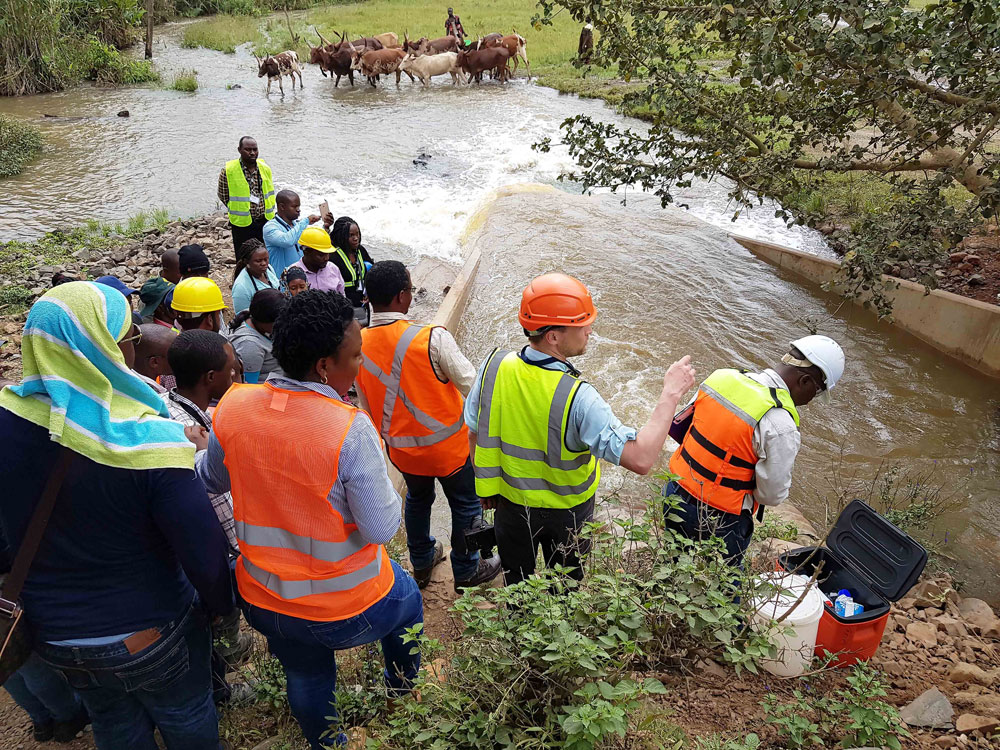 Water sampling close to a mine in Tanzania.

Impacts on air quality is, as water, controlled by the way the mine is managed, but also by factors such as climate, topology, availability of water and composition of rocks. Dust from mining operations or waste can contain harmful elements such as chemically or radiologically toxic metals, which can have health implications when breathed or when dust contaminates water sources. A large amount of dust, even if not containing significant amounts of toxic elements, can also be harmful.

Dust is often controlled by spraying water on haul roads, open pit walls, waste rock piles and so on. In arid climates with high winds, high temperatures and low precipitation, dust can be hard to control due to water evaporating quickly. Special liquids and solutions, which doesn’t evaporate as quickly, can be used in these cases.

Negative impact on air quality can also come from gaseous emissions from smelters, processing plants, machinery or power plants. These can contain heavy metals or acid solutions which can be harmful to the environment. These emissions can often be controlled by installing filters and flue gas cleaners.

Vibrations and noise are often counted among the airborne impacts. These can have negative impacts for local communities and wildlife. The mine can potentially have a large area of disturbance due to heavy transports, carrying concentrate or supplies, going to and from the mine.

Social impacts from mining projects are many and diverse. The impacts can differ heavily between projects, but some are general and always need to be considered such as land-use and land occupation. The social impacts of mining will be further discussed in lecture 6.

The impact on wildlife can be large depending on factors such as location and size of the mine, availability of water, safety measures etc. Different types of wildlife react in different ways to mining, some may be heavily impacted and some not. Wildlife documentation is important in the baseline study, and continued monitoring of certain species can give more information on how the environment is influenced by the mine than for example monitoring metal content in rivers.

Protecting animals from the mine operations, for example from trucks, open pits and shafts, can  be done by installing safety measures such as fences. 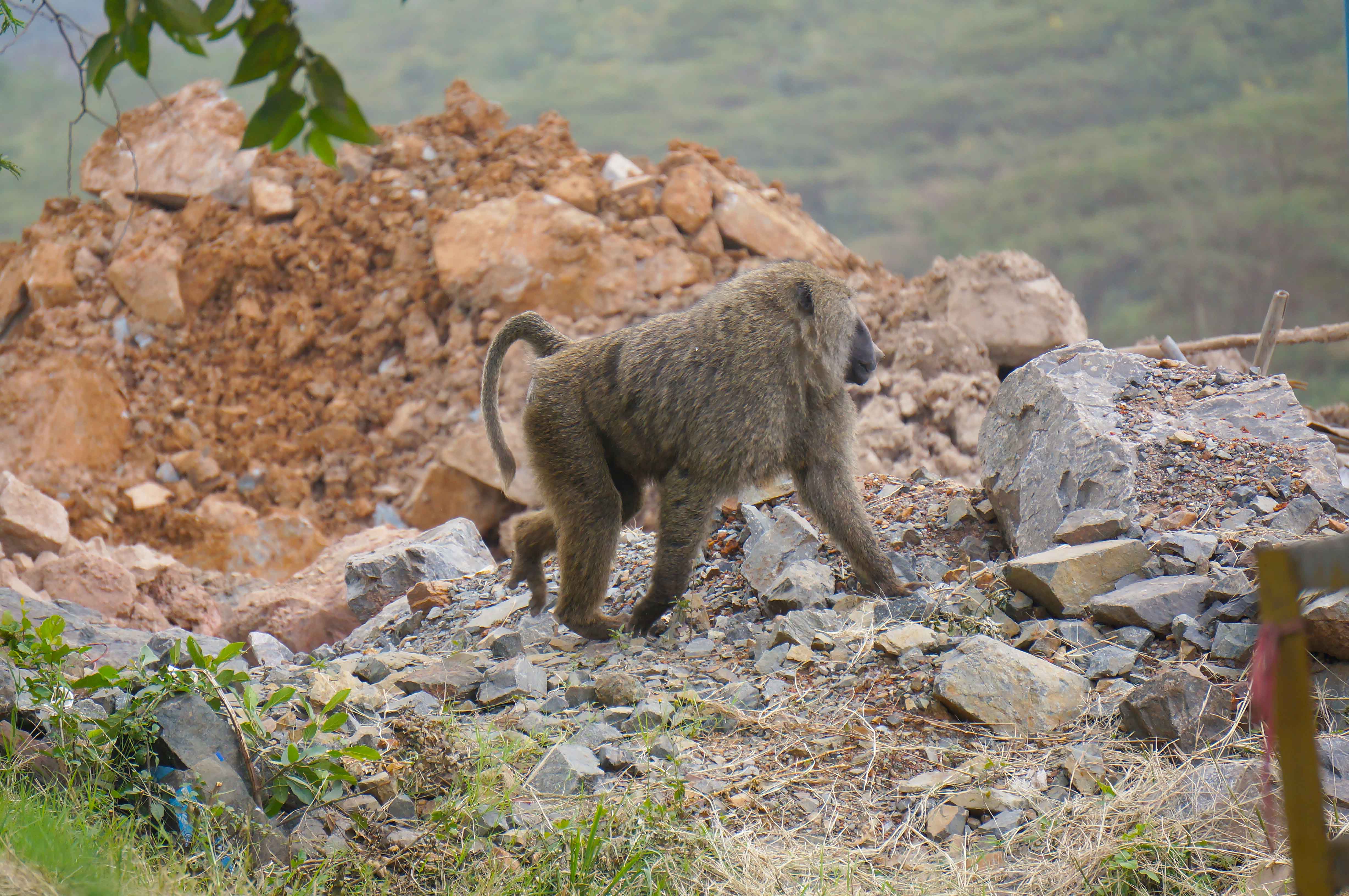 Wildlife on a waste rock pile.

As an industry which consumes large amounts of energy, the climate impact of a mining project can be significant and should be considered in the EIA. The climate impact from mining factors from release of greenhouse gases in relation to usage of machinery, processing of ore and energy consumption, but is also impacted by the loss of carbon uptake in lost forests and vegetation.