Lena Söderberg takes office as new Director General at the Geological Survey of Sweden on January 20th. Previously Lena has been the Managing Director of The Swedish Water and Wastewater Association, SWWA. She is the Chairman of the Board of Swedish Forest Agency and a member of the Advisory Council for Swedish Energy Agency.

It is with great confidence that Lena Söderberg takes over as Director-General. She is looking forward to a challenging and exciting time at the geological survey. 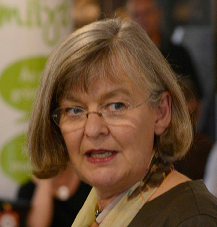 – SGU is an agency with excellent reputation among its stakeholders and with an important public mission. We have many both knowledgeable and committed employees. Our mission to be the expert authority on bedrock, soil and groundwater is becoming increasingly important in an era of climate change, environmental impact and the world's increasing demand for minerals, says Lena Söderberg.